In the tenth part of Filmmaker‘s interview project with prominent figures from the world of transmedia, conducted through the MIT Open Documentary Lab, Katerina Cizek gives her take on the way digital technology is shaping contemporary storytelling. Cizek is currently the director of the NFB’s HIGHRISE project, exploring new forms and new approaches to content. HIGHRISE is a multi-year, many media series of projects. You can see it at highrise.nfb.ca and her previous project Filmmaker-in-Residence at filmmaker.nfb.ca.

For an introduction to this entire series, and links to all the installments so far, check out “Should Filmmakers Learn to Code,” by MIT Open Documentary Lab’s Sarah Wolozin.

MIT OpenDocLab: How did you become a digital storyteller? Were there any projects that inspired you? If not, where did you look for inspiration?

Cizek: I’ve always called myself platform-agnostic. I’ve worked in all forms of media: photography, print, video, radio, and, of course, digital. I was really a child of the digital revolution and its democratizing effects. That’s what allowed me to get into storytelling, and understand the relationship between media and community.

My first real experience on the ground was behind the barricades at the Oka Crisis. It was a significant event in First Nations history in Canada. The municipal government wanted to build a ninth hole of a golf course on ancient Mohawk burial grounds. The community at Kanesatake said no, and they put up a blockade and it escalated with a shootout with the local police. The Canadian Army was sent in and there was an armed standoff for 77 days. I ended up behind the barricades, and witnessed a very different lived experience than what I was seeing on television at the time.

From that moment, I became committed to the need to amplify community voices. That propelled me into exploring the relationship between media and community, in what was then the very beginnings of the digital era. Already handicams were making their mark in terms of people being able to document their own lives in an accessible and affordable way. I was hooked on the possibilities of community organizing, community activism, and creating media and stories, and exploring how they might work together.

I made my first big web project in 2002, as a companion to a documentary I made with co-director Peter Wintonick, on this very subject, in fact, called Seeing is Believing: Handicams, Human Rights and the News.

MIT OpenDocLab: What are the most useful skills for an interactive storyteller? What are the tools of the trade?

Cizek: Adaptability. Collaboration. Curiosity. And then just good old pixel-pushing. So many digital artists come from such diverse disciplines. Some more from coding, others from the art-music-photography worlds.

MIT OpenDocLab: When you start an interactive project, how do you put together a team?

Cizek: Our methodology is a bit different from other kinds of digital projects out there. HIGHRISE is founded on the idea of inter-disciplinary collaboration. So our teams include a broad scope of disciplines: architects, urban planners, academics, civil servants, landlords, community engagement officers, animators, web developers, art directors, creative technologists, sound designers and of course, highrise residents themselves. In HIGHRISE, as in Filmmaker-in-Residence (the project that Senior Producer Gerry Flahive and I did previously at the NFB), the stories and the projects stem from the relationships rather than the other way around.

As the director, I am having multiple conversations concurrently, some more to do with content, others more about technology and emerging forms. At a certain point, I see a connection, and the conversations begin to converge. That’s how a project begins. 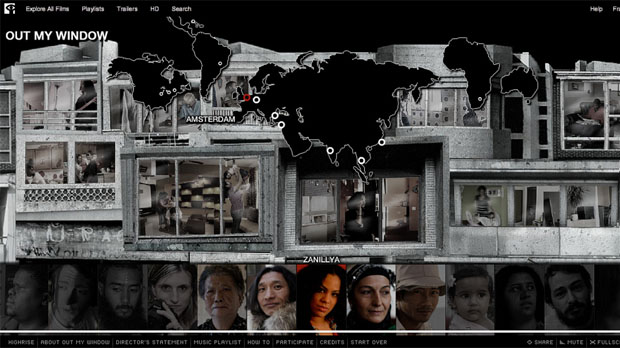 MIT OpenDocLab: Where is this community and how can people access it?

Cizek: You need to create your own community around projects, because it really doesn’t exist yet. The most exciting part of it is the multidisciplinary approach. In some respects, it’s like starting a band, but with people from many different walks of life. You go to gigs, listen to other people’s work, get to know people and how they like to work, and eventually you find a way to play together. A part of this world is definitely entrenched in the “ad agency/creative company” culture, but it’s pretty easy to get past that quickly with the right partners.

MIT OpenDocLab: How does the role of a director change? What are the creative challenges?

Cizek: I love what Walter Murch says about conventional filmmaking: “The director is the immune system of the film.” And in interactive, that fundamental role doesn’t change. It’s the director’s responsibility to see the big picture, to collaborate, and to create an environment for people with talent and expertise to do the best that they can do (whatever that may be!), and keep bad things away from the production.

MIT OpenDocLab: How does the role of the audience change?

MIT OpenDocLab: What’s your level of understanding of coding or programming? Do you see the relationship of director and creative technologist as analogous to director and cinematographer? (Why or why not?)

Cizek: I learned basic html about 15 years ago. Coding is the 21st-century stage of necessary literacy. We all need to learn the basics. The Mozilla Foundation is doing some phenomenal outreach work on this, arguing for a digital literacy, starting very young. They’ve created great tools for kids to learn. We ran some workshops with them last summer at one of the highrises we work in, with girls nine to 13 years old. Recent refugees, many still learning English. It was really incredible to watch how quickly they could pick it up.

MIT OpenDocLab: How do you find funding for digital interactive storytelling projects?

Cizek: I am really fortunate to be working at the National Film Board of Canada, Canada’s public producer. It’s an organization with a firm commitment to original digital production (starting with our project Filmmaker-in-Residence in 2006) and is doing work that very few can around the world. The mission is to explore and nurture the public sphere. So we are mandated to do things that precisely no one else might be able to do.

MIT OpenDocLab: What’s your idea of the new model of distribution?

Cizek: The big question for everyone is how to be heard above the huge noise of the trillion or so websites out there, without just talking louder, and how to get to large sets of audiences. I like Henry Jenkins’s notion of “spreadable media” rather than “viral media.” He advocates that we should understand the sharing of media with more of a sense of agency than disease.

MIT OpenDocLab: What’s your vision for how to exhibit interactive projects?

Cizek: There’s clearly a tension between an intimate single-user experience, and a live or physical collective viewing experience. Not all projects are suited to do both, and it doesn’t make them less important if they don’t. I know traditional film festivals are beginning to explore how to exhibit digital work. IDFA DocLab does live screenings, which are quite performative. I performed HIGHRISE/Out My Window there, and I’ve performed Out My Window live with musicians too several times, it’s really fun. We also created an installation at IDFA, which was a great experience. Sundance and Tribeca are now in that space, looking to “spatialize” the works, in gallery-like settings. I feel it brings the work into more of an art-world experience.

MIT OpenDocLab: Where do you see the future of this field going?

Cizek: We are early days. It’s questionable whether we will even be able to access the digital projects we are making in 10-15 years! So it can feel ephemeral. It’s a big issue at the NFB, which has done great work to make decades of old films accessible for free online. Now, we are working to figure out how to archive this digital work so that it can be seen down the road, because whatever we are doing then, it’s most certainly not going to be what we are doing now. But we won’t get there from here if we don’t continue to experiment, which is what makes it worthwhile.

HIGHRISE: Universe Within
A Short History of the Highrise
Highrise: Out My Window
Highrise: One Millionth Tower