Radio Right Left captures Americans’ feelings about our collective future in hopes of discovering a common ground that can bring us together.

“We do not need to agree with each other, but we do need to listen to each other because when we do, we strengthen our democracy, our country and ourselves.”

At a time when personalization algorithms have turned social media news feeds and web searches into echo chambers, Radio Right Left creates a safe space for a conversation between different viewpoints and aims to reinstate optimism for a shared future.

Halsey Burgund’s participatory web platform is made up of three parts: contribute, listen and map. Users can contribute to the project by leaving an audio message with their views about America’s collective future or they can listen to an audio stream comprised of recordings by other participants. This audio stream is laid in a bed of ambient music and the voices fade in and out in a stylized way, creating an immersive soundscape that is typical of Burgund’s other sound pieces created with his audio augmented reality tool, Roundware. A second way to view the audio testimonies is by choosing the “map” option which reveals the location of each audio track. As the map populates with more stories, the visualization may unravel interesting findings and analyses about American society.

Grounded on the principle of mutual respect, Halsey Burgund urges users to not give up when they hear something that offends them. By creating a structure where fellow Americans can hear each others’ feelings and concerns, Radio Right Left promotes an atmosphere of tolerance and understanding. 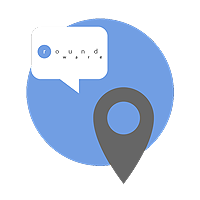