_Production Process of “Do Not Track”

Case study of production process of web documentary Do Not Track

Do Not Track is an interactive web documentary series about internet privacy directed by Brett Gaylor and co-produced by Upian, NFB, Arte, and BR. In the project proposal of Do Not Track, director Brett Gaylor quotes Jeff Hammerbacher, a former Facebook employee: “The best minds of my generation are thinking about how to make people click ads”. Channeling the famous first lines of Allen Ginsberg’s Howl, Hammerbacher’s statement solidifies what Gaylor identifies as having gone awry with the Internet. Do Not Track addresses questions around this phenomenon: When and how did the internet become home to targeted advertising where a user’s browser history determines the advertisements she sees? How do data brokers collect and sell information about users to hundreds of companies? If we don’t want to be tracked, how do we fight back?

To ask these questions, Do Not Track takes on the same production strategies used by many web developers. Do Not Track is a documentary for the web, rather than a documentary on the web. It optimizes its story for a web experience through offering personalized stories, short video content that keeps the viewer focused and basic interactivity that keeps the user constantly involved.

The storytelling method is not the only thing Do Not Track tailors to the web; it also adopts the agile design production methods of tech and design fields. The documentary content is optimized through web analytics and iterative design. The filmmakers have also developed communication and collaboration strategies to work efficiently with an international and interdisciplinary team. This case study focuses primarily on the methods Do Not Track creators used to develop a film in an “agile” method, how they collaborated internationally, and how they composed a script under these conditions.

Filmmaking models generally follow what Brett Gaylor refers to as “waterfall production methodology”. This means that research, filming, editing, and release follow each other in strict order, using a “top-down” approach. Waterfall development techniques put all the planning and research up front, followed by design, then finally development and testing. If something unforeseen emerges during the testing phase, it is difficult to go back and modify the original design.  Do Not Track borrows its production language from software development, where a host of development methodologies with names like Agile, Iterative, Scrum, and others have replaced traditional waterfall methods. These “agile” methods focus on rapidly creating prototypes, cycling through the entire process of product development quickly and changing approach on the fly as new information emerges. Gaylor explains that the waterfall method is still widely used because it fits into the funding and exhibition models of the film world. Funders do not want to stray away from conventional methods, while exhibition models are not quick enough to adapt to new filmmaking methods. “If you want your work seen at the festivals it needs premieres. But what is a premiere on the internet?” Brett asks.

One way that an “agile” approach benefits the web documentary format is that each episode can be changed based on the analytics of the prior episode. In addition to the “personalized” aspect of the documentary, the documentary is also changed based on aggregate analytics. To picture how this can impact a film, consider how companies like BuzzFeed go so far as to release multiple headlines for the same story, testing each to see which has the highest click-rate. Gaylor says that web documentaries can also apply these techniques. By thinking of each episode and each two-week production cycle as a separate project, rather than a single long project, adapting to previous results and learning from them comes easily. Gaylor compares the phase of releasing a new episode every other week to a festival run of a film, in which you get useful feedback and press attention, then have time to make changes before officially releasing the film.

Though it is true that film production does follow a standardized and linear production process, it is also subject to serendipitous changes, coincidences, and improvisational choices. This type of improvisation is difficult when producing content for the web, because of the technical complexity already involved Gaylor thinks that by considering agile web production techniques as a model, it may be possible to create a new production process that carries over positive aspects of traditional film production but accommodates a more rapid product cycle and web-native interactivity and responsiveness.

One remarkable feature of Do Not Track is its international and interdisciplinary production team, who collaborates remotely for the majority of production. The team what Gaylor calls the “RACI” model to collaborate.  As shown in the figure below, the model assigns each team member to categories named Responsible, Accountable, Consulted, Informed. This approach indicates the roles of each member upfront and clearly. People who are ‘responsible’, ‘accountable’ and, ‘consulted’ all contribute creatively to the project but, at the end, the final decision is the responsibility of the ‘accountable’ person. The ‘informed’ group receives updates about the project but they do not collaborate creatively. This coherent distribution of responsibility prevents micromanaging and gives people enough room to experiment. Gaylor is a firm supporter of this method: “That’s how I think you get good results when something is distributed like this. If you are in there micromanaging every step and nobody is having any fun, you’re going to just fail, you’re going to have ultimate burnout”. 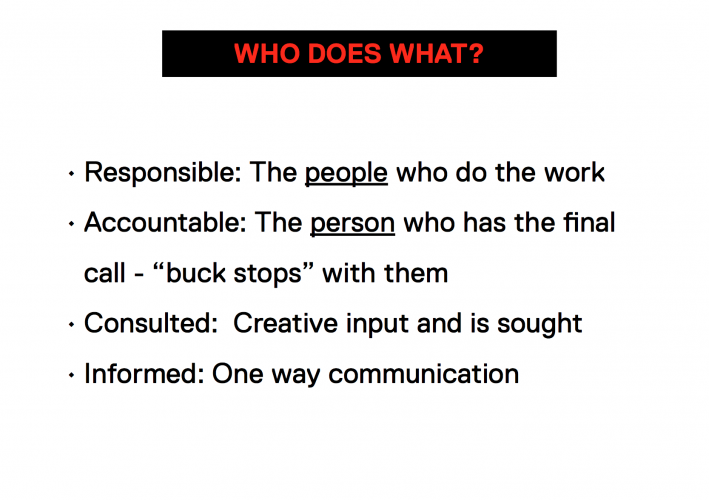 RACI Model – from the “Episode Guide” of DNT

The team behind Do Not Track was organized into separate core groups for story, design, development, montage, project management and conversation management. The figure below illustrates how the RACI model was employed across these groups. 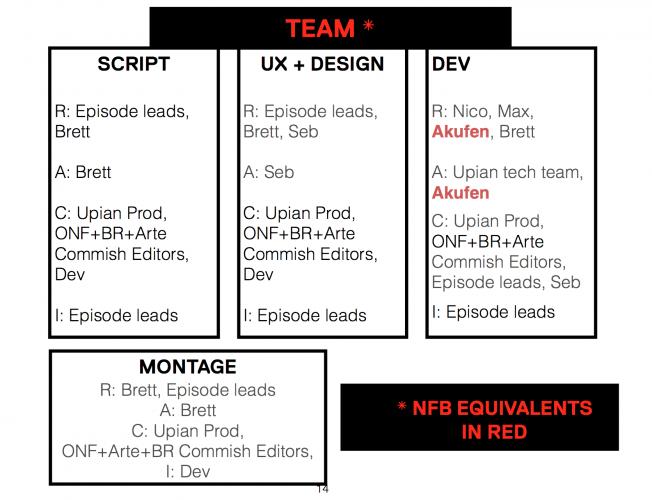 Team – from the “Episode Guide” of DNT

The Script team creates the story. The UX team designs all the elements that go into the project. The development team codes the interactive documentary,  and the montage team edits the film.

Gaylor explains that on an interdisciplinary team, crosstalk between developers, designers, and project managers is a necessity. A project manager, for example, might not need to be able to code, but should be able to ask the right questions of coders. As Gaylor explains: “A good product manager is going to ask the right sort of naïve questions like, ‘Did you think about it this way?’ Or, ‘Oh okay I understand, it takes too long to create this because of this service, have we considered writing this one our self, what would that take?’” 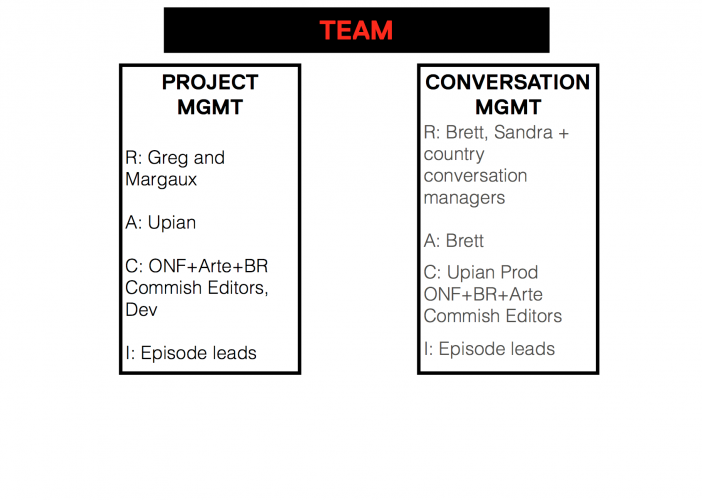 Team – from the “Episode Guide” of DNT

There are two organizational teams in Do Not Track. The project management team is responsible for the production of the whole project, from filming to web design to development. The conversation management team handles outreach, marketing, and user experience outside of the website. Below is a chart illustrating how the conversation team works. 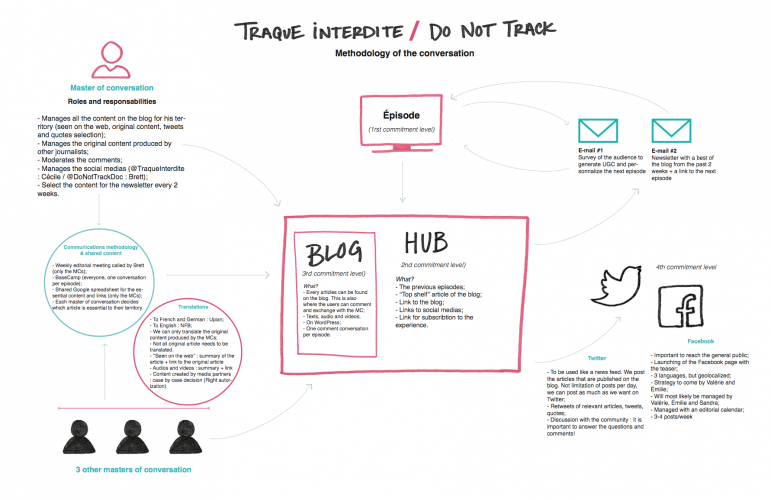 But how do you communicate with a team that is dispersed around the globe? Collaborators are from Quebec, British Columbia, France, and Germany, which makes communication a big challenge. Do Not Track began with several large, in-person meetings in Paris, where they developed a style guide and production schedule. After this, the team relied heavily on real-time collaboration tools like Google Docs, Basecamp and Slack, and a weekly online action meeting. For Gaylor, communication is basically project management and that’s part of the work.

Writing for i-docs is a challenge: multiple types of media, interactivity, personalization all have to go into the script. How do you organize all this information? How do you create a script format? This is a complex question, and the storyboard of Do Not Track reveals some interesting solutions. Interactivity is communicated through state-based storyboards, where a user is not just at a timestamp, but also has several variables attached based on personalization and prior choices. “Fail-states” convey scenarios when things don’t go as planned (such as viewer’s Facebook do not reveal enough data). The script also has labels to mark different types of media. These labels offer a convenient vocabulary for writing interactive docs.

The labels we find on Do Not Track’s storyboard are: 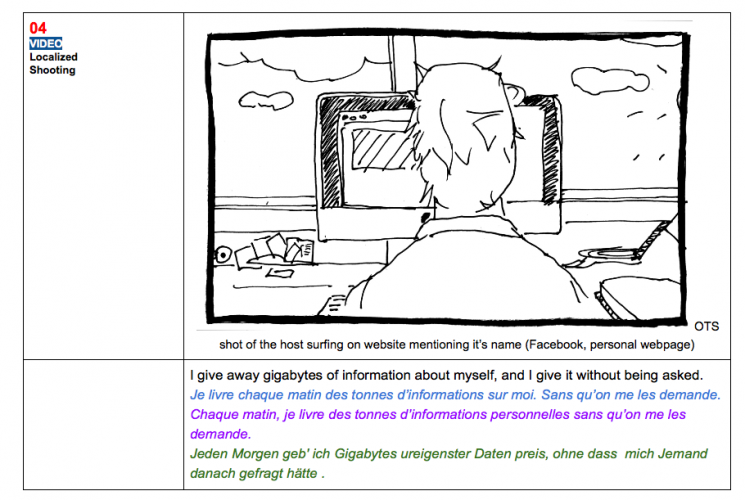 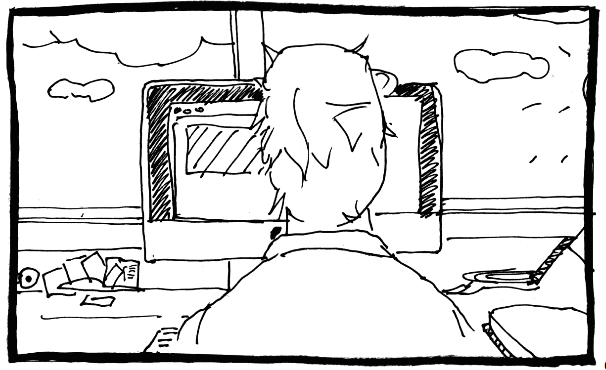 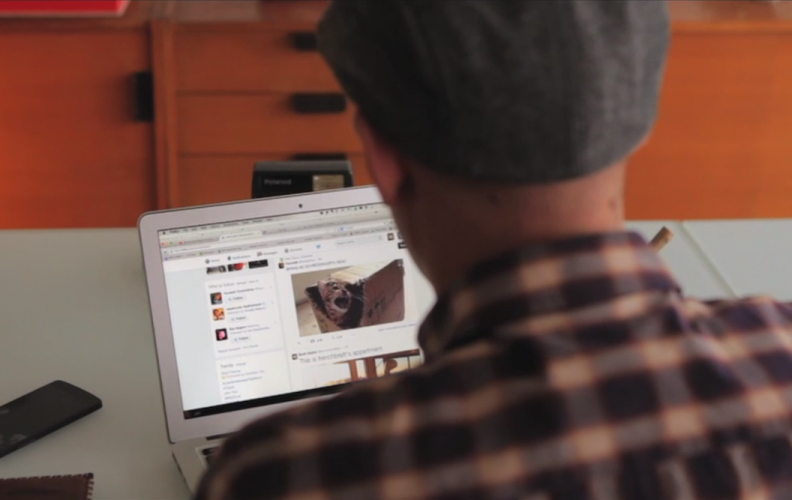 2-Text Input: The information users input to make the experience personalized. Note that the video is “Cinemagraph style” which means it is a moving photograph. It can loop forever until the user puts in information. 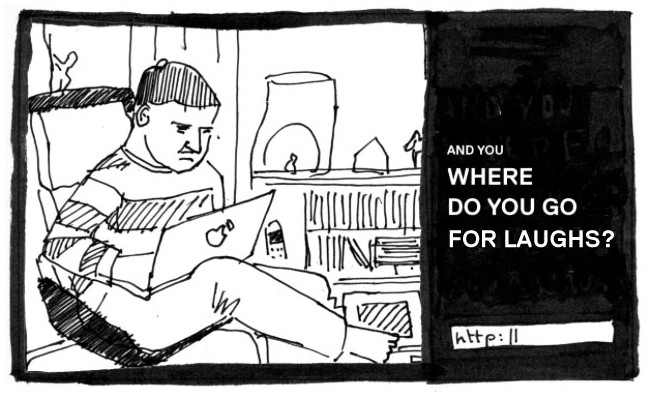 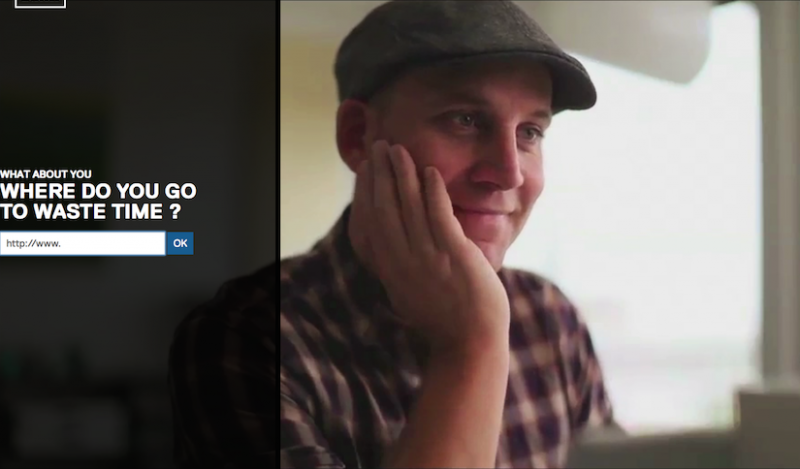 3- Real Time: This label is used to mark the moments when users see information depending on the data they provide and on the data the DNT API collected from their IP, such as where someone lives, which computer she uses, etc. (User Dynamic Information) 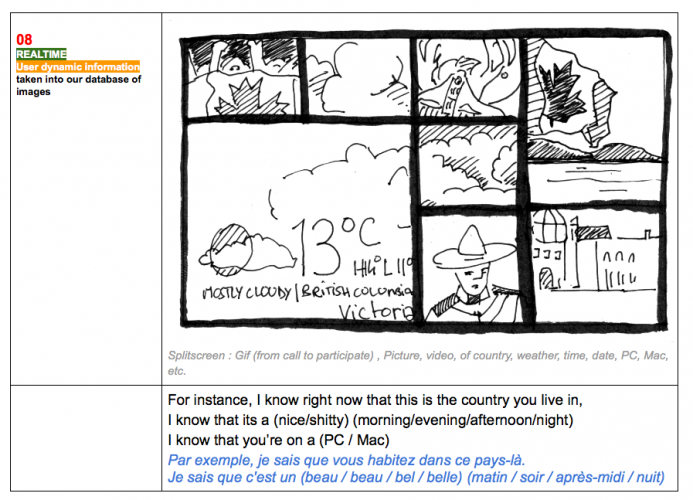 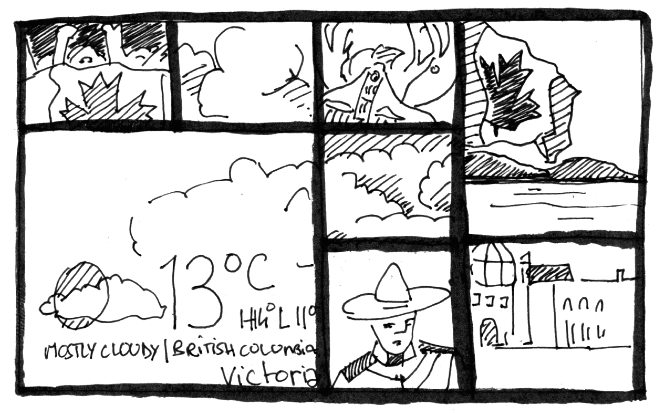 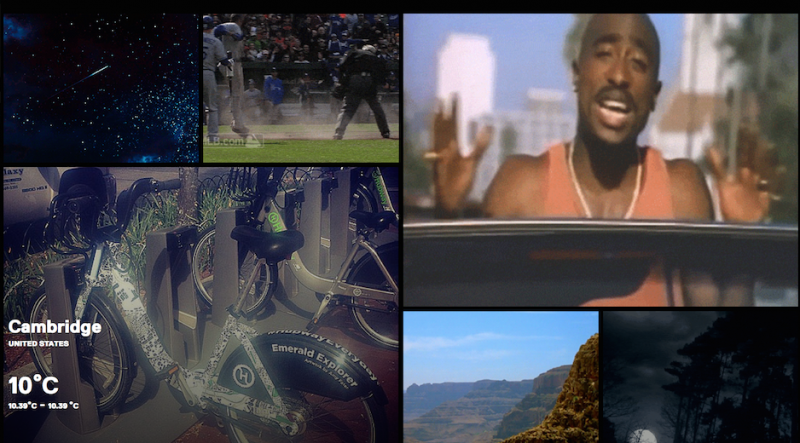 4-Fail States: What if the user doesn’t provide any information, or the information provided is not adequate? For those scenarios there are alternative scenes,  which are marked as Fail States. 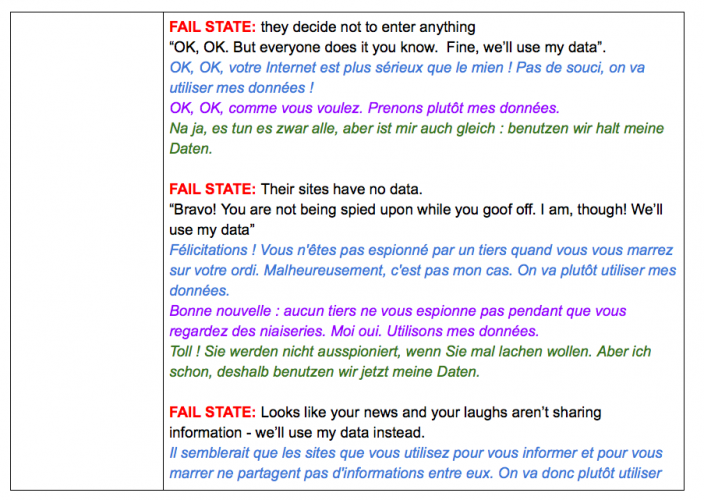 5-Archive: This label is used for archival footage. 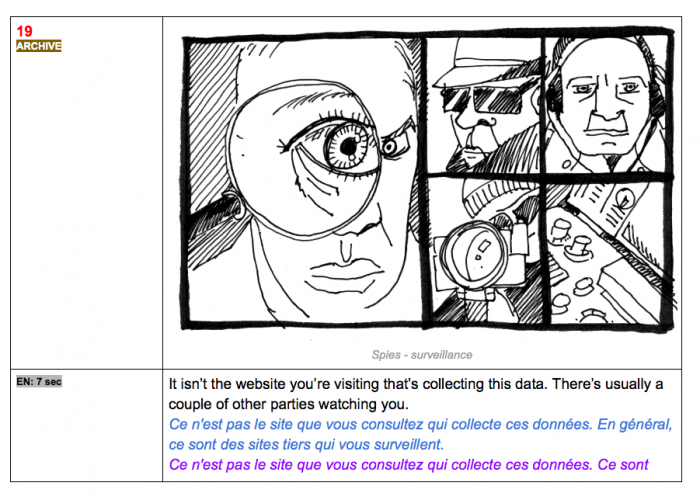 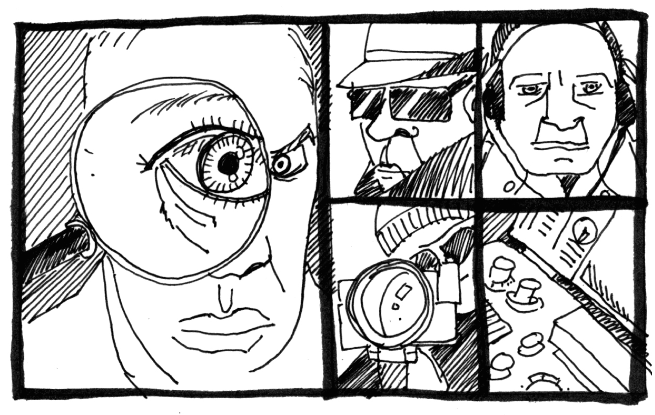 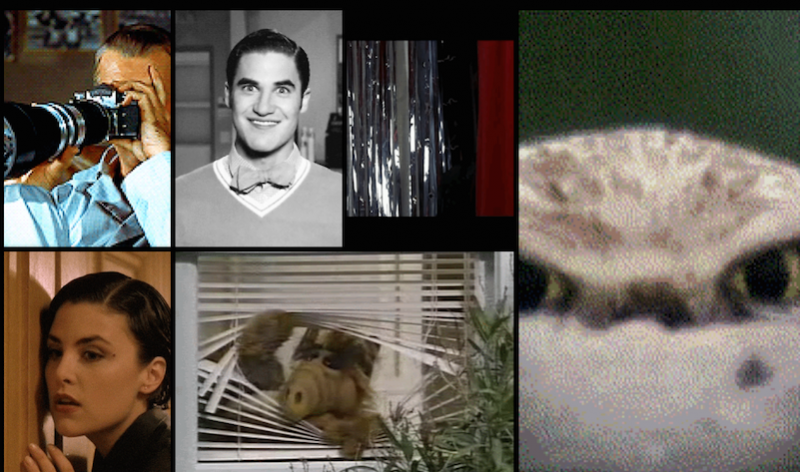 Other labels include “Audio Only”, for cases, where the user only hears audio and “Animation”, when animated images are used.

How do you brainstorm and make decisions? Easy! Discussion about the script was made through Google comments: 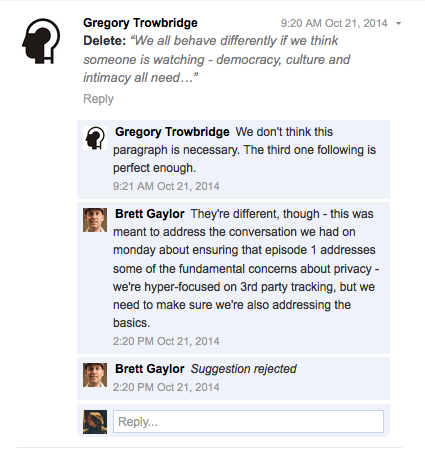 An Example of how RACI model works. Since Brett is accountable for the script, he has the last say to reject or accept suggestions.

Do Not Track presents a highly innovative production model; it borrows from web and tech development as well as filmmaking in order to find the best process for the form. It brings techniques from web development into film production: agile methods, long-distance collaboration, and state-based storyboards. While these approaches fit naturally into the distribution system of the web  (making it immediately available and modifying it on the fly), they don’t integrate well with the established funding or distribution models for film. New analytic tools for understanding user behavior can be a powerful source of knowledge about the audience to filmmakers, and can help them identify problems or miscommunication, but these tools are not without risk. The rapid prototyping cycle can be reductive; user-centered filmmaking can lead to flat content. Do Not Track is aware of these shortcomings and tries to walk on a tightrope balancing flashy with meaningful, brief with comprehensive. Furthermore, in order to illustrate its subject, Do Not Track uses the same tools as advertising companies: personalization and social media logins. It doesn’t preach against analytics or algorithmically customized content: rather, it relies on these tools. However, by revealing how the tools work, the documentary seeks to inform the audiences about these technologies and what implications they have on our everyday life while leading the audiences in taking the action steps, using security softwares and websites, to ensure their privacy online.