Francesca Panetta works as Special Projects Editor at the Guardian.

She commissions and oversees immersive interactive features which combine and layer text, film, sound, pictures, data and graphics with the aim of deepening audience engagement and innovating in digital storytelling.

Francesca also works as a freelance sound and radio artist.

This playlist features interactive projects which have been lead by sound. As an ex-radio producer and sound artist, I believe audio is particularly effective in emotionally connecting when telling stories. It also leaves room for the imagination. Some of the strongest interactive documentaries have recognized this, building from audio up. Here are a few.

1_John Lennon: The Bermuda Tapes
2_Highrise: Out My Window
3_Alma: A Tale of Violence
4_CIA: Operation Ajax
5_A Journal of Insomnia 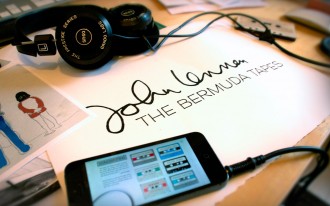 An interactive app that tells the story of John Lennon’s life-changing journey sailing through a Mid-Atlantic storm to Bermuda in June 1980.

John Lennon: The Bermuda Tapes takes excerpts of Lennon's demo tapes recorded in Bermuda and places this journey on tablets and phones as a kind of interactive game. Users can navigate the yacht over the ocean as they listen to anecdotes about the journey, visit the disco in Bermuda that inspired him in his new project, wander around the island’s botanical gardens and listen to demos of various tracks.

Out My Window is simple in format but incredibly powerful. Built from audio stories from residents of Highrise buildings around the world, Kat Cizek has imaginatively painted these with stills and text and placed them in to interactive 360 environments. It highlights what we all know - the necessity to start with powerful stories and a clear concept.

Alma is another strong narrative. It is a linear testimony by a Guatemalan young woman of her involvement with one of the country's brutal gangs. One single audio line is visualized with two parallel visual narratives. One is conventional straight to camera storytelling, the other illustrative material. But the format shows a possibility of single audio lines with many possible visualizations. It also emphasizes the power of a single narrative storyline.

A interactive graphic novel about the Iranian 1953 coup. This storyline is told visually but the sound design is phenomenal.

The NFB's Insomnia project came in two parts. Part A was a questionnaire asking insomniacs questions about their sleeping routines. These questions were posed by a gentle female voice and your answers could be recorded in words, drawing or video. There were 80 questions ranging from the seemingly innocuous "what time is it?" to "how do you hide your sleepless nights?". It's an example of how the human voice has the potential to lure you in, but also of how documentary storytelling can be the questioning and interaction rather than the usual narrative biography.